Stanley Papio moved to Key Largo in 1949, at a time when the island was largely uninhabited.  He had no neighbors, there were no businesses on his doorstep, he lived an isolated life on a stretch of U.S. 1 at Mile Marker 101.  A welder in the U.S. Army during World War II, he took up the practice on his property, opening a business soon after he moved.  Papio encouraged people to leave old cars, washing machines, bed springs, and any other metal appliance on his property, which he transformed into his artwork.  Encroaching developers, condominiums and neighbors were opposed to his junk collection; Papio was there first, why should he alter his property?  After all, he was there first.  Papio fought back, he went to jail six times for zoning violations.  This garnered much attention in the media, and soon he encouraged visitors to the Florida Keys to stop at ‘Stanley’s Art Museum’ to view the satirical metal sculptures depicting his neighbors, naysayers and people he considered to be ‘environmental rapists’ – admission was 25¢. 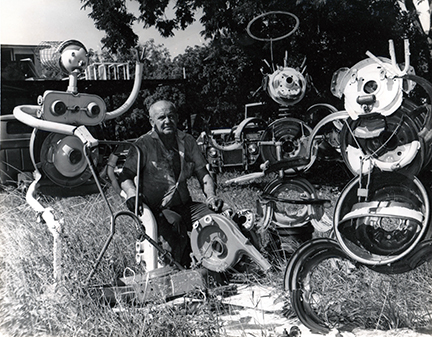 Stanley Papio with his SculpturesKWAHS Collection 0000.00.5070

At one point, Papio said, ‘I don’t have a junkyard.  That’s all my future works out there, but you can’t tell that to people with nothing in their heads.  Even when I’m done with something, they think it’s just garbage because it’s made out of junk.’  He was right.  Before long, art critics took to visiting Papio’s museum.  They appreciated his creativity and imagination, and his skills as a welder were also remarkable.  At his own behest, Papio exhibited his work in Ottawa, Canada.  It is unclear how his pieces toured Europe as part of the U.S. State Department’s America Now exhibition.  Papio did have plans to build a trailer and take his work on a traveling tour of the United States, but he died suddenly of a heart attack at the age of 67, before he could fulfill his vision of the traveling exhibition. 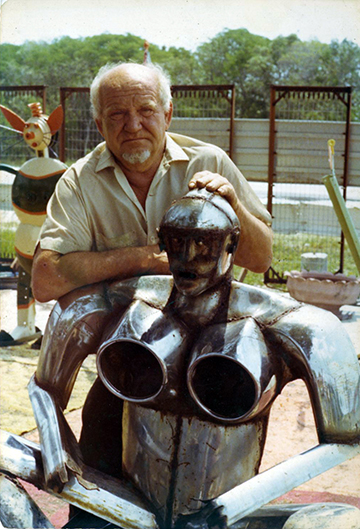 The Key West Art & Historical Society is proud to present Stanley Papio: Junkyard Rebel as a permanent exhibition at Fort East Martello Museum.  The exhibition will include several sculptures created by the folk artist, from the whimsical to the dramatic.  It explores Papio’s life in Key Largo, particularly focusing on the issues had with his neighbors and how the rebellious Papio fought back.