In July 1934, Key West, once one of the richest cities in Florida, formally declared itself bankrupt. Of the 13,000 people who inhabited the town, 80% were on relief rolls and the City was deeply in debt.

Once-flourishing sponge and cigar industries had long since moved elsewhere making it difficult for Key West residents to pay their taxes.  Unpainted houses, weedy beaches, debris-littered streets and dilapidated storefronts became commonplace, all of which told the story of an isolated city in urgent need of help.

Realizing the seriousness of the situation, Governor Dave Sholtz appointed Julius Stone as head of Florida’s Federal Emergency Relief Administration (FERA) to ascertain what could be done. After careful study, Mr. Stone determined the only way to rescue Key West was to embark on an extensive restoration and beautification program to transform the weary, unkempt island town into a vacation paradise.

A significant portion of the city’s gallant effort to reinvent itself came through the Federal Art Project (FAP), a division of the Works Progress Administration (WPA), a federally sponsored program that supported professional artists who needed work.  Stanley Wood and Avery Johnson were the first WPA-FERA artists to arrive in Key West, followed by Alfred Crimi, Eric Johan Smith, Adrian Dornbush, Richard Jensen, and Peter Rotier.  Chronicling the wonders of the island, their paintings, etchings and murals were hung throughout the town.  Reproductions of their work were made into tourist brochures, posters and postcards and sent throughout the country to entice tourists to visit America’s only Caribbean city. 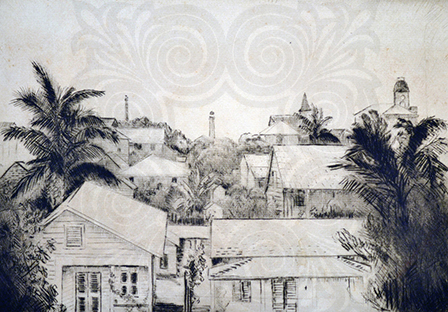 As the reputation of Key West spread, more artists arrived such as Walton Blodgett, Marion Crawford-Parker, Townsend Morgan, and Martha Watson Sauer. In late 1937, the Federal Art Project and the WPA helped the city build a facility “for the encouragement of cultural development in the field of art” and the Key West Community Art Center was born. The Art Center quickly became the artistic home for a burgeoning cultural community. Activities at the Center created a widespread interest in art; professional artists, residents, and tourists joined in art lessons, lectures, demonstrations and gallery exhibitions. As Charles Griffin Farr, one of America’s great realist artists, described his work on Key West Federal Art Project/WPA, “Anything that was happening in town was at the Center.”

The cultural movement that began with the WPA project in Key West has influenced virtually every artist who works in this town. The artists change, yet the colors, the scenes and the talents of the island continue to amaze residents and visitors alike. The Key West Art & Historical Society is home to a number of the WPA inspired paintings, such as those shown here.