In 1856, Yellow Fever was raging in Havana. The United States Mail Steamer, SS George Law, was diverted to Key West (its one and only visit) for refueling with coal. The ship was carrying over $2 million in California Gold ($76 million value today). Peter Burnett, first Governor of California was a passenger whose diary recants this eventful voyage.

The SS George Law was forced to load coal in Key West due to a yellow fever outbreak in Havana. She had her name changed to SS Central America, which sank soon after the stranding described in this lecture. Her cargo was worth some $1.5 million in gold in 1856! 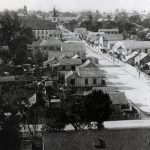