VIRTUAL Happy Hour with the Historian | The Wrecking Industry

Ships began wrecking along the Florida Reef almost as soon as Europeans reached the New World.  The majority of sailing ships returning to Europe caught the Gulf Stream, which meant they passed close to the Florida Keys and their surrounding shallow waters.  The shallow waters were treacherous to navigate, particularly when the weather was volatile. This resulted in a number of shipwrecks scattered up and down the Florida Keys. ‘Wreckers’, or salvagers, quickly realized the financial possibilities that came with recovering goods from the shipwrecks.

When Key West was settled in 1822, the city soon became a port of entry, and quickly became Florida’s most important port.  By the 1830s, Key West accounted for 60% to 90% of imports and exports for the Florida Territory (Florida was not yet a U.S. State). The majority of this economic traffic was due to local wreckers.  The wrecking industry was in its prime from the 1820s through the 1890s and was a highly organized and regulated business with dozens of vessels and hundreds of men active in the trade at any given time. Key West had warehouses for storing salvaged goods, shipyards for repairing damaged ships and for building wrecking vessels, and ship chandlers for refitting ships. There were many years when the wrecking industry brought more than $1 million dollars to Key West making its citizens one of the wealthiest groups in the United States per capita.

In an effort to reduce the number of wrecks on the Florida Reef, the United States government funded the construction of a series of lighthouses along its length. While this did not immediately produce a decline in wrecking, during the ensuing years, the industry slowly tapered off. The number of ships passing through the Florida Straits was steadily reducing, there were advancements in lighthouse design as well as navigational charts and navigational equipment. This meant that by the end of the 19th century, wrecks were infrequent. Eventually, in 1921, the wrecking courts were closed, ending an era that had made Key West one of the richest cities in America. 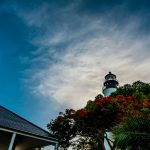