As Key West grew in population in the early to mid-1800s, a number of incurable diseases were a constant threat to the city. Historian Fred Borch talks about how cholera, smallpox, tuberculosis, yellow fever, and other diseases arrived in Key West and how the city was affected. He will also talk about measures taken by Key West leaders to protect the city from these diseases and mitigate their impact on the island.

Fred Borch is the Regimental Historian and Archivist for the Army Judge Advocate General’s Corps. He served 25 years as an Army lawyer before retiring from active duty in 2005. The following year, he returned to the Army as a civilian and today is the only full-time military legal historian in the U.S. government. Fred has history degrees from Davidson College and the University of Virginia, law degrees from the University of North Carolina, University of Brussels (Belgium) and The Judge Advocate General’s School. He also has an M.A. from the Naval War College.

The Distinguished Speaker Series is sponsored by the Division of Cultural Affairs and the Florida Council on Arts and Culture, The Helmerich Trust, Aloys & Carol Metty, and The John & Marilyn Rintamaki Family Charitable Fund

DSS | January 22, 1912: The Greatest Day of the Greatest Week in the History of Key West with Seth Bramson 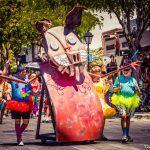