For over five centuries, the Dry Tortugas and its reefs provided the setting for the stories of pirates and privateers, soldiers and sailors, lighthouses and shipwrecks, naturalists and prisoners, fishers and tourists. Isolated 70 miles west of Key West, the islands of Dry Tortugas National Park appear to arise as if by magic, floating atop the waters of the Gulf of Mexico. Juan Ponce de León named the islands, making “Tortugas,” the second oldest persistent place name in all of North America. The history of Dry Tortugas is tightly linked to that of the adjacent Florida Straits, an essential passageway for the commerce of nations, to its reefs that over the centuries claimed hundreds of ships, and to Key West. The nation’s most ambitious masonry fortification, Fort Jefferson, secured Union control during the Civil War and was infamous as a prison including for Dr. Samuel Mudd and other convicted Lincoln conspirators. Scientifically studied for over a century, its waters, coral reefs, and aquatic life remain among the most biologically intact in the American tropics. Seabirds nesting there breed nowhere else on the continent. The Tortugas continues annually to attract thousands of tourists, scientists, fishers, divers, birders, and other visitors. In this talk, authors Dr. James A. Kushlan and Kirsten Hines share some of the diverse stories of Fort Jefferson and the Dry Tortugas that they have uncovered in their book Dry Tortugas National Park.

James Kushlan is a biologist, educator and writer. His professional positions have included those of research associate Smithsonian Institution, director Patuxent Wildlife Research Center, professor University of Mississippi and Texas A&M, and wildlife biologist for south Florida national parks including Fort Jefferson and the Dry Tortugas. He is past-president of the American Ornithological Society and Waterbird Society. He currently serves on boards of Fairchild Tropical Botanic Garden, Zoo Miami, Everglades Foundation, University of Miami College of Arts and Sciences and BirdLife International. He has a Ph.D. and two honorary doctorates and has had published over 250 technical papers and 12 books.

Kirsten Hines is an author, photographer and conservationist. Anchored by her master’s degree in biology and background as an environmental educator, her writing and photography highlight nature and wildlife around the world. Her photography illustrates her award-winning books and has appeared in such magazines as Shutterbug, Expressions, Audubon, and in nature photography showcases, public art programs, and many solo and juried exhibitions. She has had published five books. She is a board member of the Florida Audubon Society. Her photography and blog and other information can be found at KirstenHines.com.

Coconut Grove residents, Jim and Kirsten have co-authored the award-winning books Attracting Birds to South Florida Gardens, Birds of Fairchild, and Key Biscayne, as well as Biscayne National Park, and Dry Tortugas National Park, the basis of this lecture.

Their next co-authored book is entitled Everglades National Park. Dr. Kushlan’s Seeking the American Tropics (a historical book on south Florida’s early naturalists) was published this summer. Kirsten’s forthcoming books include Wild Florida for the University Press of Florida.

Sponsored in part by the Helmerich Trust, Lee Garrison, and the Florida Division of Cultural Affairs 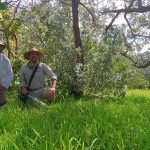