If ever a place could embrace spirits and revelry as part of its heritage, Key West would have to be it. But just why IS Key West so notorious for its history of imbibing & carousing? With such an extensive military presence on the island, coupled with a transient seafarer community, and the fact that Key West was essentially cut off from the remainder of the United States, the emergence of bars is not surprising. On this lonely outpost, prior to the arrival of Flagler’s Overseas Railway in 1912, there was not much to do in terms of entertainment. Bars sprung up in the seaport area, and nearby present-day Truman Annex, which was then the naval base. These bars offered respite from a day’s hard labor, the opportunity to socialize with colleagues, a chance to win money in a game of cards or billiards and the possibility of meeting a nice young lady or two. As the tourism industry grew, so did the bar industry, cultivating a “mixed” feeling along with its “anything goes” attitude. Happy Hour with the Historian will explore not only bars, but also the island’s association with gambling, prohibition, rum-running, and the military.

Happy Hour with the Historian is sponsored in part by The Helmerich Trust and the Florida Division of Cultural Affairs. 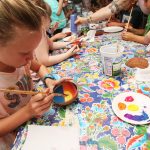