Professor Bramson, who is America’s single most-published Florida history book author, has written five histories of and about America’s most exciting railroad and you don’t and won’t want to miss his talk, THE FLORIDA EAST COAST RAILWAY: FOR 125 YEARS AMERICA’S SPEEDWAY TO SUNSHINE.

Beginning at 6:00 PM, Seth will regale us on that incredible railway line’s history, the life of it’s founder and builder, Henry M. Flagler, and, of course, the story of the Key West Extension, told as only he, the only person in the country who bears the official title of Company Historian with an American railroad can tell it.

Please join us on January 9th, beginning at 6:00 PM to hear “the greatest railroad story ever told” and we know you will be both fascinated and enthralled with Professor Bramson’s talk.

Even without appearances over the last seven years on A & E, Discovery Channel, Fox FX The Collectibles Show, History Channel, Florida Public Broadcasting, the Learning Channel and Turner South Network, it would still be safe to say that Seth Bramson would still be nationally known as America’s foremost authority on the history of transportation to, from and within Florida as well as the leading and foremost collector of Miami memorabilia and Floridiana in the nation.

He is certainly South Florida’s foremost and leading historian, and he is the author of more books on, about and dealing with the history of the Sunshine State than anyone else in history, with five of his thirty-five books dealing directly with the Florida East Coast Railway. He is the only person in the country who bears the official title of Company Historian with an American railroad and his book, SPEEDWAY TO SUNSHINE: THE STORY OF THE FLORIDA EAST COAST RAILWAY is the official history of that famous line.

A 1962 graduate of Miami Beach High as well as Cornell University’s famed School of Hotel Administration, he holds Master’s degrees from both St. Thomas University and Florida International University, and he is a sought-after speaker and presenter.

He is a consultant to the hospitality, transportation and healthcare industries and is Adjunct Professor of History at both Barry and Nova Southeastern Universities. In addition to his books, Seth is the author of more than three hundred articles, including six in refereed or juried publications and he is quoted regularly by Florida newspapers as well as, from time to time, in magazines and, on occasion, by “U. S. A. Today” and “The New York Times.” 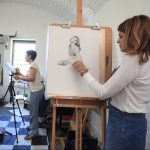 Life Drawing Class
Distinguished Speaker Series | The First Peoples of Key West: Archaeology at the Stock Island Site and Beyond