Happy Hour with the Historian | Key West During the Civil War

This month’s lecture with explore the Key West’s historical significance in the context of the American Civil War. Though fought in thousands of different places from Pennsylvania to Texas; from New Mexico to Florida, no blood was shed on or around the island. Despite our geographical distance from the principal battlegrounds, Key West was an indispensable outpost for Union forces.

Key West was essentially a Southern town. In 1860, it had a population of 2,862 inhabitants, including 451 slaves and 160 free blacks. Although a few of the inhabitants were immigrants from the New England area, and there was an added interspersing of Bahamians, the majority of the citizens were either native to the island city or were migrants from neighboring Southern states. Certainly, the major leaders of the community, with few exceptions, were wholly Southern in sympathy.

Regardless of residents’ alliances, the island itself proved to be a significant stronghold for the Union and stood as a central force for blockade efforts along the Gulf of Mexico. Ships assembled at the island’s port, using it as a base of operation for the East Gulf Blockading Squadron, whose missions proved fruitful in freezing Confederate trade efforts. It was also where ships assembled to fuel prior to operations, such as the capture of New Orleans. 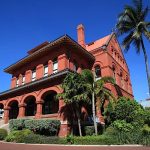 KWAHS Members – Bring a Friend to Breakfast at the Custom House